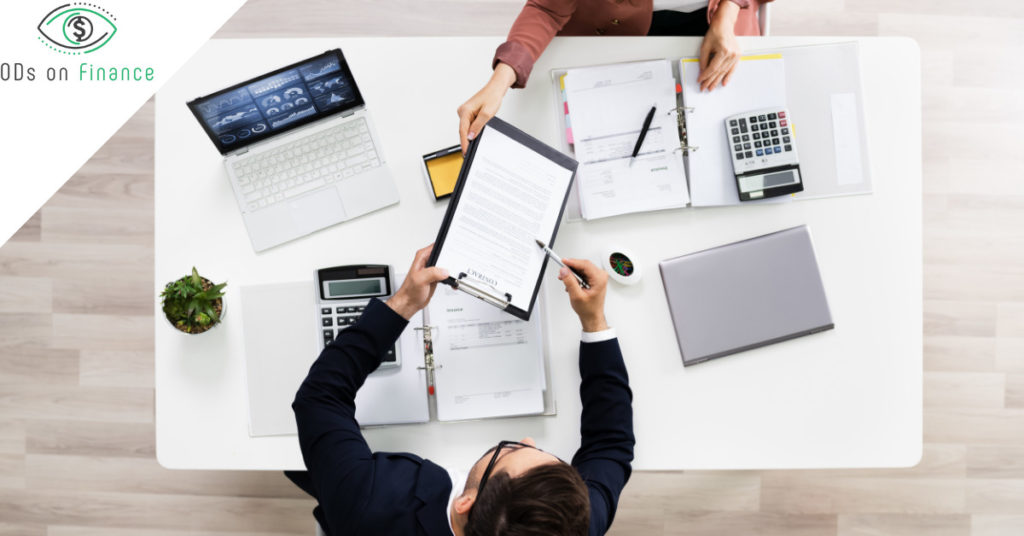 Reviewing contracts can be tedious, challenging, confusing, and flat out exhausting. However, the contract review and negotiation phases of the career search journey are arguably the most crucial steps in the entire job search process. This could set you up for huge financial success early on in your career, or it could keep you stuck at an office where you would rather not work any longer out of fear of breaching your contract.

I have reviewed dozens and dozens of contracts just over the past couple of months, and the biggest mistake most optometry job seekers make is focusing on the one aspect of a contract that is easily understood - salary. We tend to focus on compensation because it’s easier for us to understand as compared to legalese. However, I would argue that the non-salary contractual items are equally, if not more, important than wages. This article will briefly discuss three non-salary red flag items to be aware of during your contract review.

Rarely will an optometrist receive an employment contract without a non-compete agreement. Unfortunately, these clauses tend to be one of the biggest sticking points in a contract negotiation. Many employers say that they “can’t” budge on the non-compete restrictions. Of course, they can, they simply don’t want to.

These agreements vary drastically based on a variety of factors, mainly geography. Typically, a restrictive covenant prevents a (former) employee from working within a certain distance from the office location(s) for a designated period of time. Commonly, this time frame ranges from 1-3 years. The radius restriction can be just a few blocks in a large city, to 30 miles in a rural, small town.

Furthermore, some employers with several locations describe non-compete contractual agreements to prevent employees from practicing near any of their locations, regardless of whether or not the employee ever worked in the other offices.

Another common component to a restrictive covenant is an employee essentially agreeing not to “steal” staff or patients during a set period of time, usually 1-3 years.

Anecdotally, many doctors report that restrictive covenants are notoriously difficult to enforce. There may be some truth to this, but do most employees want to risk legal battles over a breach of contract? Likely not. Just the threat of a potential lawsuit is enough to keep most employees in check. Furthermore, certain state governments (like California) are cracking down on the legality of non-compete agreements. Recently, the Biden administration has taken steps towards asking the Federal Trade Commission to curtail the use of these contractual clauses.

Of course, non-compete clauses can be more complex with many additional details to sort through. Seeking contractual assistance/guidance is recommended to allow for a full understanding of the minutiae.

Aside from Non-compete clause, another common component to a restrictive covenant is an employee essentially agreeing not to “steal” staff or patients during a set period of time, usually 1-3 years.  Anecdotally, many doctors report that restrictive covenants are notoriously difficult to enforce. There may be some truth to this, but do most employees want to risk legal battles over a breach of contract? Likely not. Just the threat of a potential lawsuit is enough to keep most employees in check.

One of the most exciting aspects of reviewing contracts for optometry students, new grads, senior ODs and even optometry business owners is having the opportunity to interact with colleagues from around the country. They share with me their follow-up success stories and how beneficial the contract review was.

Unfortunately, engaging with a large number of optometrists also allows me to hear the horror stories of previous contractual mishaps. One of the biggest and most common mistakes ODs make during a contract negotiation is agreeing to terms based on a verbal (aka handshake) agreement.

I spoke with a young OD who worked for an uncle who agreed to give the OD a bonus and a raise after one year of employment. Suffice it to say, the young OD never received the financial rewards that he was (verbally) promised. Regardless of the uncle’s excuse, the blame falls on the young OD who failed to get the terms written into his employment agreement.

I chatted with another young optometrist recently who was expecting to buy a practice from a senior OD family member based on their working relationship and previous buy-out discussions. Unbeknownst to the young optometrist, the senior doctor sold the practice to a private group, leaving the associate to seek other business ownership options. Again, the business owner likely could have maneuvered the situation with more respect for the associate OD, but the young optometrist should have pushed to get a signed buy-out agreement with the employer.

The stories go on and on. Most of us think we won’t get burned by a verbal agreement...until we do. With that in mind, when it comes to contract negotiations I don’t trust anything that is not in writing. If an employer agrees to give an associate a bonus based on certain goals met, I don’t believe it unless it’s written into the employment agreement. If a business owner promises to reimburse an associate optometrist for attending a CE meeting, I don’t assume it’s going to happen - it needs to be put in writing.

If an employer offers a benefit and means what she/he says, then she/he should have no problem placing such an item in the contract. If a business owner verbally agrees to a perk and is hesitant to include it in the employment offer, then that should be seen as a red flag.

In short, don’t fall for verbal or handshake agreements. Get EVERYTHING in writing!

When it comes to contract negotiations I don’t trust anything that is not in writing. If an employer agrees to give an associate a bonus based on certain goals met, I don’t believe it unless it’s written into the employment agreement. If a business owner promises to reimburse an associate optometrist for attending a CE meeting, I don’t assume it’s going to happen - it needs to be put in writing. In short, don’t fall for verbal or handshake agreements. Get EVERYTHING in writing!

Just about every optometry employment contract that I have seen has included a termination clause. In essence, these passages state that an employer or employee may terminate the contract with notice. More specifically, the majority of contracts stipulate a termination be designated “for cause” or “without cause.” Employment agreements tend to describe what acts may be considered “for cause” - typically a violation of terms, neglect, or an inability for an employee to perform duties, amongst other possibilities. Generally, a termination of employment “for cause” results in an immediate separation between an employer and an employee, whereas a termination “without cause” is utilized when either party simply wants to move on from the other. Dissolutions without cause typically involve advanced notice of leave in the range of 30-90 days.

Clearly, a longer notice of leave is beneficial to an employer, as it would provide her/him more time to find a replacement associate OD. On the contrary, a shorter notice tends to benefit an employee as they are usually the ones to initiate a job termination, and therefore they would be able to leave the employment position sooner.

Be wary of termination notices depicting double standards. For example, I recently reviewed a contract in which if the employer wanted to terminate the agreement without cause, he would have to give the associate a 60 day notice. However, if the employee initiated a termination without cause, he was obligated to give the employer 180 days. As an associate OD, could you imagine working at a location where you no longer wish to be employed for six additional months after you put in your termination notice? Heck no!

Having the opportunity to review several optometry employment agreements every week, I can say that no two contract offers are the same. A few are very brief while others stretch to 23 pages long. Some are extraordinarily generous to associate optometrists and others are excessively restrictive. Each and every contract includes potential red flags, the extent of which could be the subject of 10 different articles. This brief overview highlights just three major items for associate ODs to be aware of when reading through their employment agreements.

For those interested in discussing these topics more or if you are curious about signing up for a consultation session, feel free to sign up for a time to chat using the Calendly Link 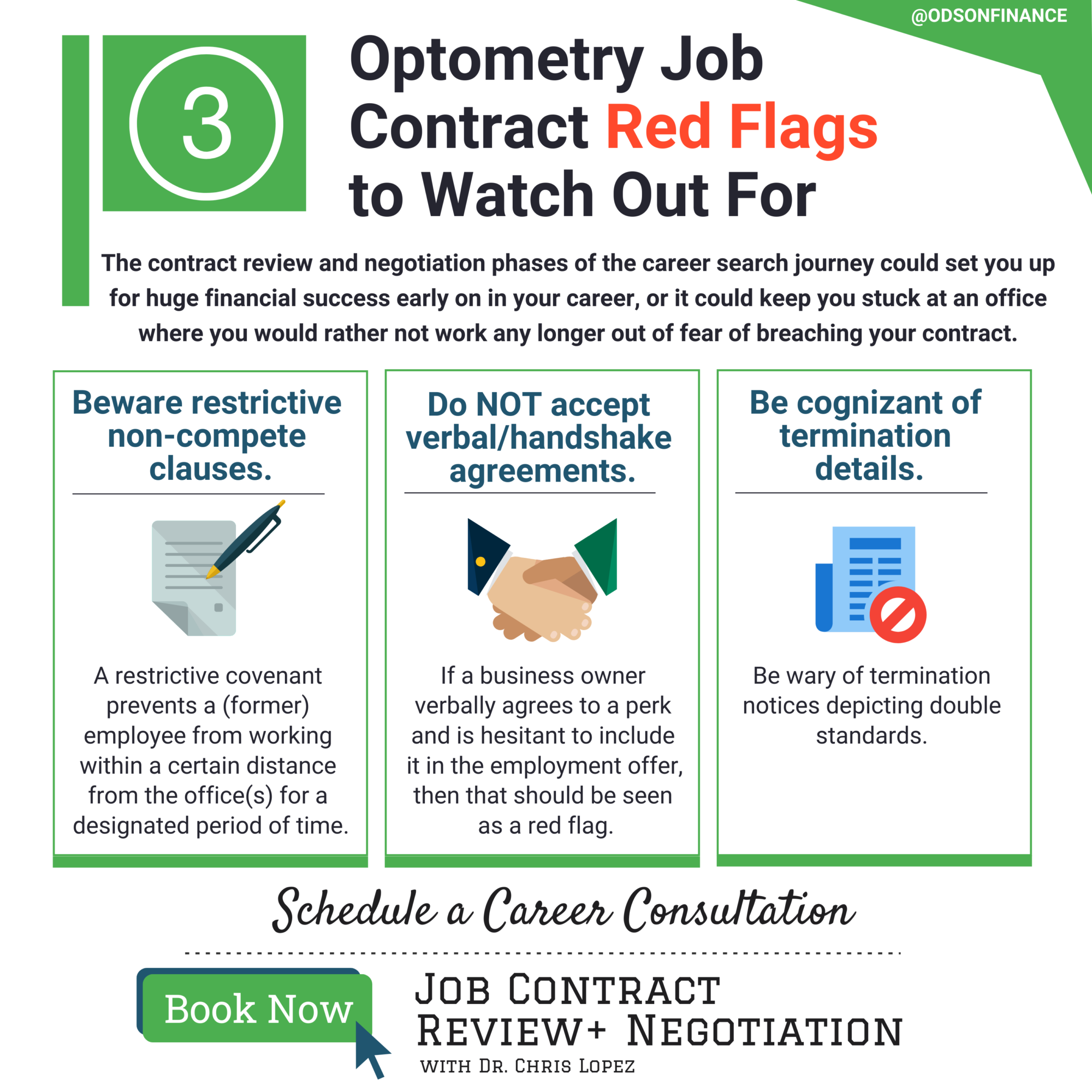 Want to get a the lowest Student Refi Rate + $1000 Bonus Cash? Compare Rates at Recommended Lenders

5 Tips to Stand Out in Your Job Search

3 Tips on How To Ask For an Optometry Raise

8 Dos and Don’ts When Purchasing an Optometry Practice

5 Things to Avoid During Your Career Search

The Optometrist’s Guide to Writing a Business Plan

Optometry Job Compensation: Are You Underpaid?

Dr. Christopher Lopez graduated Summa Cum Laude from the University of Houston College of Optometry. He is originally from Southern California and now resides in Wisconsin with his family. Chris is on the path to crush his student loan debt while working towards practice ownership in the near future. He publishes articles for different optometry journals and ODs On Finance, and is passionate about helping optometry students and young ODs navigate their job search journey. Chris is an advocate of passive index fund investing and plans to get into real estate (once his student loans are paid off!). Need Career Advice or Contract Review? Book a Calendly Appt | calendly.com/odsonfinance-career-consulting

View all posts by Chris Lopez →